Preparation of the stay

The actual application for the university abroad was very simple, thanks to your website I simply contacted you by email and got all the documents I had to fill out plus a checklist. Your website took care of everything for me and also reminded me when I forgot something. : D

The acceptance came quickly and I was then sent all the information about the university, the surrounding area and the various housing options.

The administrative procedures were a bit more complicated. First of all, documents had to be collected such as a valid passport, a confirmation from the bank that you have the necessary financial means, the I-20 form from the CSUF and the passport photo in Visa format.

After that, I was able to register online at the American consulate and fill out a very long and detailed form. You should be very precise and check the necessary data several times because this data will be used to decide on your visa. The interview afterwards is more of a purely formality, mine only lasted 3 minutes.

I can tell you one thing because I still had to wait for my student loan, I really applied for my visa at the very last minute. I had the appointment on Wednesday, on Saturday the passport with the visa came back and on Monday morning my flight left.

So you really can’t complain about the working speed of the embassy, ​​the only negative thing is that such a visa is expensive and you have to reckon with around 300 €.

After all the fees had been paid at various institutes and the invoices had been received, I was able to make an appointment for an “audition” – for America you can choose between Frankfurt, Munich and Berlin. The appointment itself went smoothly and quickly. All I had to do was provide the required documents and give them numerous fingerprints. A very brief conversation in English also took place. The whole procedure was over after 45 minutes and I was able to drive back to my hometown.

Now it was time to look for an apartment and after a long time back and forth I was looking so far on site because the dorms are totally overpriced and most of the apartments were not what I wanted.

But then I found 3 girls via the Facebook group for my semester who were still looking for a roommate, they also came from Germany, only stayed 1 semester and the apartment was within walking distance of the university.

I can’t really say anything about formalities, as everything was already settled.

However, do yourselves really a favor and ignore the list of the university, since the cheapest apartments in the area where the American students live are not on it.

Many of my American friends told me afterwards where I gave them our price that we were ripped off.

After everything was settled, my flight went to America in August, I bought the “Viber” app, which allows you to make calls over the Internet and it’s free. So I was in contact with my roommates who had flown before me.

Furthermore, for America, the local transport had to be organized in advance. Everyone did that via the Facebook group, so you could share a shuttle together and the price was lower.

You should definitely buy a car on site. There are so many great places so close and the fuel is really not expensive in the USA so that you will make many great road trips. And always renting a car is not cheap either, if you want to do that I definitely recommend “firefly-car rental” in Newport Beach, which is a bit further away. However, the cars are really cheap there we paid for a weekend in Vegas so pick it up Friday Monday bring back $ 85 with insurance and all.

Study in the host country

The university is part of a large system of public universities and with 37,000 students it is quite large. I felt the real size of the CSUF on my first day when I was hopelessly lost, which was amazingly exhausting under the hot Californian sun. The northern half of the university consists of a sports complex with numerous fields and buildings for soccer, basketball, football, softball, tennis and much more. All the lecture buildings are then located in the southern half. All in all, I liked the campus very much. It was laid out like a park and very clean.

Emergency telephones could be found about every 50 – 100 meters, which established a connection to the campus police. And at night, the campus police were happy to bring you to your own car.

The CSUF is known for the high quality of the business courses and has integrated the Mihaylo College of Business and Economics.

That was very convenient for me, as I mainly took business courses and am therefore very satisfied with the quality. In the following I list the courses I have taken and briefly rate them:

At first I was shocked, because in addition to 3 exams and 4
tests, we are also expected to give a small and a large presentation. However, the evening lecture quickly turned out to be very relaxed. The technically competent lecturer taught us the various steps of project management in detail and also improved our presentation skills. Only the blackboard notes sometimes sprouted into incomprehensible giant diagrams. I am pleasantly surprised at the easy way in which you can acquire a lot of specialist knowledge and am confident that the course content will be relevant for my later professional life.

Here an “old-school hardliner” who was about to retire made life difficult for us. Although I was positively surprised by the depth of the course content, the teaching methods of the lecturer left a lot to be desired. He didn’t think much of PPT and generally found computers unnecessary. Housework generally had to be done in writing, which was provocative for dull summing up and huge tables. The course grades were mixed here. To make matters worse, there was apparently a communication error between the two departments – the course was for accounting majors who are in their final semester before graduation. Unfortunately, neither of these applied to me. Nevertheless one has to mention

This lecture flooded us with a flood of group work (7) and tests (over 10) as well as exams (4). Since I already have the exact same topic in a

The American lecture is far more detailed than what I know at home and, in my opinion, has good practical relevance. In addition to SQL, we were taught all the tricks of database administration, design approaches and the latest technologies such as big data solutions with concrete implementations of Facebook.

The extremely personable lecturer explained everything about networks to us in great detail. In addition to the usual content such as the OSI model and various LAN technologies, the lecturer also went into depth with regard to public networks.

We talked about the structure of the data centers of DSL providers, cable providers and LTE providers.

Even the physical technologies such as amplitude modeling and transmission techniques via satellite were explained.

The exams and homework were extremely easy – too easy in my opinion. Nevertheless, the take – away value is enormous here too.

In summary, I found the course to be simple but extremely valuable. I was amazed that even without studying bulimia, one can accumulate more knowledge than in the German lectures. However, one point of criticism should not be concealed. Since I joined the CSUF as an exchange student, I could not use the online course selection system.

The exchange students had no choice but to run to the lecturers manually with pieces of paper. However, the paper students were only evaluated using the online system, which meant that we could only get a seat in a course if not a single local student was interested anymore. Thus, it was suppressed in the early morning or late evening (until 9:45 p.m.).

Living in the USA

Daily life in the US is amazing whiteness almost like in the famous films. Big cars and gigantic highways, huge supermarkets and amazing package sizes, cheap gasoline
and a loose gun law. Indeed, Americans are very open and friendly. Irrelevant conversations with strangers arose at every opportunity and people even apologized to me when I stood in someone’s way.

The brilliant location of my university in Orange County opened up numerous possibilities for excursions. The beaches in the Golden State are breathtaking and the weather allowed us to swim in the
ocean at Newport Beach in January as well . Even if the world famous TV series “OC California” or “The OC” is set at this location, there are even more beautiful beaches in the immediate vicinity.

Los Angeles, on the other hand, is a very dirty city and not really glamorous. Of course you should have seen the city with all its famous squares once, but even Hollywood disappointed me. A short hike to the Hollywood sign is again highly recommended. There are also San Diego and Las Vegas in the immediate vicinity, two absolute must-visits. Day trips to national parks such as Death Valley are also possible and highly recommended.
And what was one of the highlights of my road trips for me was San Francisco it is a bit longer drive but the way is really worth it you should have been there at least once.
And on the way there or back, a stop in Yosemith National Park is recommended, whereby you should also visit the Sierra Nevada, where I enjoy skiing. Because California has some of the best ski resorts in the USA and the highest mountain outside of Alaska.

To report in detail about the phenomenal social life in the USA or to explain the numerous road trips in detail would go beyond the scope of an experience report. Above all, the semester abroad in America was a carefree time for me. Friendships were made for life and experiences gained that no one can take away from me. The weather was always perfect and I gained more impressions than ever before. With all the fun, however, I also learned a lot and took valuable specialist knowledge and English skills home with me.

Actually, I didn’t want to go back to Germany at all. The behavior of my fellow citizens still annoys me at times, I still look desperately from time to time for German words and the correct German grammar, sometimes I still get very quiet and wish I were back in the USA. I will probably never see the world the way I saw it before my six-month stay in California – and that’s a good thing. 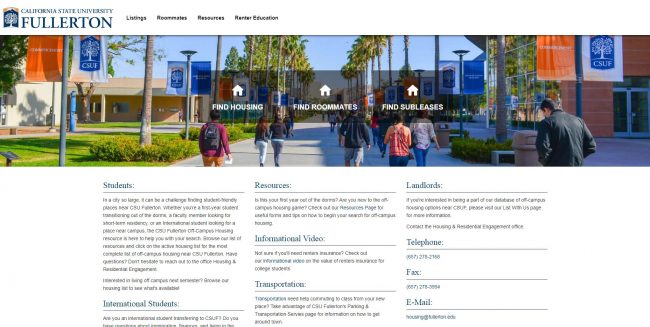