This field report is supposed to be a little different from the ones you usually read. The general issues are also touched upon, but since you can already read all of this in the other reports, I will focus my main attention on all the trappings and go into important details in more detail.

Last year I made the decision to go to America relatively spontaneously, i.e. at the end of April / beginning of May. Initially applied for Santa Barbara but rejected due to late registration, the choice fell on San Diego, also because of the reports written here.

Visa was uncomplicated, doesn’t believe the horror stories, if you don’t look like a felon or have a criminal past you are out again grinning after 3 irrelevant questions. Only the waiting time is steep depending on the month and the number of people. But it wasn’t more than 2 hours in total.

If you are toying with the idea of ​​applying for an Auslandsbafög, I just say good luck. Visas, looking for an apartment and everything else was not nearly as stressful as the (fruitless) fight with Hamburg (all USA foreign bafies run through Hamburg). In the end there were only contradicting excuses and not a penny.

Apartment: I looked for an apartment in advance via Craigslist from home and quickly found it. The secret is to write an ad yourself with details about yourself and your ideas. Then Americans will contact you and you can exchange information via email and clarify everything. Everything else is crap. Hostels are crap and looking for an apartment on site and in the end ending up with a bunch of Germans in a shit is crap too. Trust me.

People always say to look for an apartment by college or near the beach. That is only partially true. There is only one place and only one to move to for your semester abroad and that is Pacific Beach. Or Mission Beach. No, just Pacific Beach. Now it’s
going to be : 1. College area is also good, you’re close to the university and there’s all the house parties!
2. Living on the beach is too expensive!
3. You are so far away from the university!
4. Mimimi, wouwuwu

To 1: nonsense. Everyone who lived at the university wanted to swap places with the PB students later. Nothing is going on at the university, no good bar nearby, no club. House parties are quickly boring because always the same and ended by the police around midnight anyway. And the oh-so-great frat parties? Overrated, as a man you can’t get in anyway. Arrogant wannabes and chicks.
To 2: nonsense. Living at university costs just as much and if you start looking early enough you can find something under $ 800.
To 3: nonsense. One way or another you need a car, more on that later. You drive 20-30 minutes to the university and you are only there a maximum of 3 days a week anyway if you choose the courses intelligently.
To 4: Pacific Beach is superior. Your argument is invalid.

Why PB and no other beach district? Walking / bike distance to the great, great bars. Mission Beach too far away, La Jolla too far away (expensive!) And Ocean Beach? Ocean Beach is the bum and hippie district. Nuff said.

Sometimes from a non business administration / finance / marketing / Derp perspective. As an English major, I had various advantages and disadvantages. Disadvantage: The range of courses is manageable, but enormous. So no disadvantage.
Some of the advantages: No gigantic course, clear classes. Easy to get signature (I got all the courses I wanted and could throw one away). Personal contact with the lecturers. No or only a few Germans in the courses.
I took three courses called “Contemporary Literature”, “Film and Fiction” and “The Writing of Fiction”. Only three, as master courses, so only 9 units required instead of the normal 12.
The exams couldn’t be more different and the range of courses was very varied and interesting. The writing course with Katie Farris was by far the best. Ask her about the guy with the “Zombie Apocalypse” thesis.

Here is a list of the things you will do in the first few days after arrival.
1. Go to DMV and apply for California ID. You want it. You need them. The California ID is your best friend in the San Diego nightlife, bars and liquor stores. If you don’t want your fresh leather-smelling passport to have the consistency of single-ply toilet paper after 4 months, you will take my words to heart.
2. Get the phone. If you don’t take your contract with you from D-Land then get the Virgin Mobile $ 25 plan, pay $ 25 every month and get 300 free minutes and unlimited text messages. You have to get a cheap phone but that is bearable.
3. Buy / rent a car. No car, no independence, no fun. Get a car. Another point not to be despised is self-preservation. The words “public transport at night” should ring the alarm bells, as public transport is only used by individuals who cannot afford a driver’s license or are not allowed to drive a car (any more). In addition: unpunctual, uncomfortable, sloppy means of transport, nothing goes after midnight anyway and long foot / bike paths to the stations. Hands off.
4. ???
5. Profit.

Now it’s getting interesting. Since you definitely live in Pacific Beach, this will be an indispensable guide.
Monday: $ 1 Sake Bombs at PB Sushi (Garnet St, emphasis on NET!)
Tuesday: Taco Tuesday in no, not Typhoon, but in Beachwood (end of Thomas St on the beach), Longboards (Garnet St) or ANYWHERE ELSE! Why not in the Typhoon? Infinitely long queues, even when the store is empty. Cheek. Expensive margaritas that are too weak. Almost only Germans. If you are persuaded to go, stand in the VIP queue with your California ID, because you have this ID and it says your place of residence Pacific Beach, you can get in for free and faster.
Wednesday: Shore Club (end of Grand Ave) or Beachwood.
Thursday: You can have cheap drinks in Moondoggies (Garnet) for $ 2 you call it, but the place is a little rancid and I was only in there now and then. Otherwise again Shore Club or Beachwood.
There is a lot going on at the weekend, so I’ll give you the freedom to choose what is fun for yourself. But don’t miss the goldfish race in the Shore Club on Sunday!

Otherwise you will spend a lot of time learning to surf and getting to know the wonderful city, drive up Soledad Mountain in La Jolla, La Jolla Shore, Balboa Park and also downtown to the Gaslamp Quarter and the harbor. San Diego Zoo is too expensive and if you are surfing wild dolphins within a few meters Sea World is not so great either.

When you are not surfing or taking a break, lie down next to the Crystal Pier and watch other surfers or the other beach goers, preferably with a delicious frozen yogurt in hand. Or a California burrito.

You will learn to appreciate and love Mexican food, even if it takes some getting used to in the beginning. Try it a couple of times. Carne Asada Fries at two o’clock in the morning put everyone, and I mean everyone, kebab very quickly in the shade. Eat at Cotijas on Garnet Street and Dawes Street. Best. Mexican. Ever. Don’t listen to what others say.
If you’re not in the mood for Mexican (rarely happens but happens) you go to Jack in The Box. Or Carl’s Junior. Don’t worry about calories, that’s why you go surfing. You gain a little bit either way.

Even if it sounds like I just enjoyed the nightlife, studying was not neglected. The demands of the courses are good and demanding, and yet you have enough free time if you follow all courses diligently and diligently. An average of 1.0 is possible in the English course.
Nowhere else can you attend high-quality university courses and at the same time experience an unforgettable six months. The total cost is painful, but nowhere in the US is it cheap. So go to San Diego, get in touch with Americans who are (almost) all open-hearted, friendly, helpful and fun-loving. Either way, you will not be able to avoid contact with Germans, especially in the more capital-oriented courses.

I don’t have to describe road trips to Vegas, Frisco, and the completely overrated LA, as they are carried out by every clever semester abroad anyway. 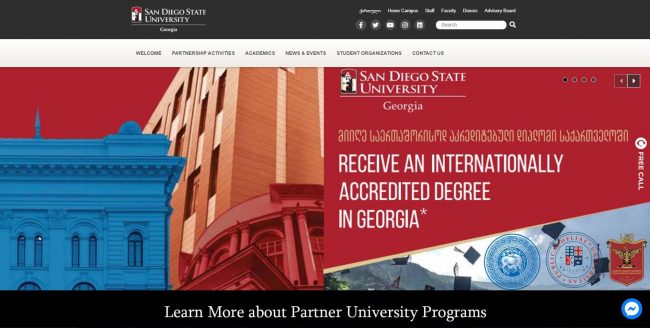